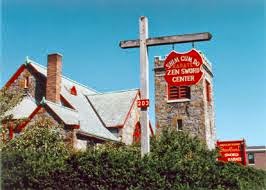 Back in my twenties, after attaining a First Degree Black Belt in Shim Gum Do Korean Zen Martial Arts, I moved into the monastery located on the outskirts of Boston. I lived with other residents and the Founding Master, Zen Master Chang Sik Kim, a Korean Zen Buddhist monk who taught us and other students at Shim Gwang Sa, the Mind Light Temple.

Shim Gwang Sa is a renovated 100+ year-old building, a former church. Students in the Residency Program have professional jobs or attend college classes during the day and maintain a daily morning and evening meditation and martial arts practice and weekly temple work schedule. During the nearly four years I lived there, the number of residents varied between nine and sixteen, and ages ranged from adults in their twenties and thirties, primarily, with a few folks in their forties.

None of us at Shim Gwang Sa aspired to monkshood. We took no vows of celibacy or poverty; we were training for good health and successful living. In ideal terms though, there was a lot we could learn from the monk: a monk always knows what he's supposed to do at any given time of the day and temple-life strove for this ideal.

In college, I had been introduced to the poems and writings of American Trappist monk Thomas Merton and German-language poet Rainer Maria Rilke. Merton's work, The Seven Storey Mountain, written during his first years in the monastery at Gethsemani, redefined contemplative life for many. Rilke had no desire to become a monk, but he was so moved by the monastic life he found when he traveled in Russia - and was particularly inspired by the archetype of the monk - that he wrote a series of poems called The Book of Hours, the title coming from the book from which monks chant the canonical hours.

I live my life in widening circles that reach out across the world. I may not complete this last one but I give myself to it.

I circle around God, around the primordial tower. I've been circling for thousands of years and I still don't know: am I a falcon, a storm, or a great song?

To the monk, a canonical hour is more a presence in the day rather than our common understanding of a sixty-minute segment of it. We come closer to appreciating the monastic idea when reflecting on the seasons of the year: each season is defined less by exact start and end dates and more on qualitative aspects of time expressed in nature.

Before the calendar marked the beginning of Autumn last week, we already knew something was underway. One sensed a subtle shift in mood: the angle and quality of light and diminishing daylight betrayed the warm summer temperatures. I noted that some of the trees had given way to this shift with changing leaves, in evidence since August. It's the time of year when personal reflection comes more easily and naturally for me, too; I reflect on personal goals, hopes, dreams. It feels easier now that children are back in school than during our active summer.

Even in our busy schedules, we notice that different times of the day have unique qualities, as well. In monastic life, each hour issues a distinct challenge and calls for a response.

Living healthy lives means building in moments of daily vision, then letting our action flow from it. A Japanese proverb warns:


Vision without action is a daydream.
Action without vision is a nightmare.

The over-arching clarity of our vision and action ultimately builds our days, our weeks, our lives. To the monk, life is about bringing together clarity of vision and action in each moment by moment. Vision alone, meditation alone, is incomplete contemplation. Completing the circle requires a melding of vision and action; all of us (not just monks!) are called to contemplation in this sense.
on October 02, 2014
Email ThisBlogThis!Share to TwitterShare to FacebookShare to Pinterest
Labels: action, clarity, goals, hopes & dreams, martial arts, meditation, Merton, monks, reflection, Rilke, ripples, seasons, time, vision
Newer Posts Older Posts Home
Subscribe to: Posts (Atom)