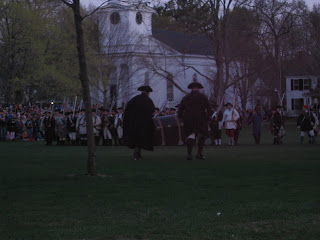 On Patriots' Day, before marathoners take their marks on the road from Hopkinton to Boston, before pancake breakfasts are served and parades step off, re-enactors will stir in the morning haze as John Hancock's nimble-footed secretary protects a trunkload of Patriot-activist papers from British Regulars descending upon Lexington's Green.


When the Stamp Act crisis developed in 1765, signaling the revolutionary era, Patriot-activists were quick to respond. Patriot men referred to themselves as “sons of liberty” and Patriot women as “daughters of liberty”. Spurred by the revolutionary cause, all were drawn to political action. 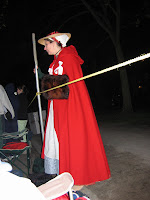 Women re-enactors tell of their participation in boycotts on finer British textiles, dressing their parts in “homespun” linen, wool, or “linsey-woolsey”. The constant spinning, knitting, and sewing, they say, kept the hands busy and the mind free. In their sewing or spinning circles, conversation would naturally turn to political and economic matters.

In her book Founding Mothers, Cokie Roberts asserts that revolutionary women did what women do in remarkable circumstances: they accompanied soldiers to camp; served as spies; organized boycotts of British goods; and defended their homesteads alone. And all the while they bore and buried and reared children. Then, the Revolutionary War was over and there was a country to raise!

How indebted I am to our Founding Mothers and Daughters of Liberty -- indeed, to all women who have elevated and strengthened the level of political thought and civic engagement throughout our democratic history. 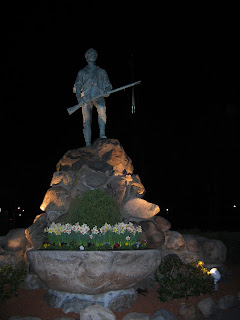 Even now, as rancorous and uncivil discourse in Congress over the size of government threatens to quash us, one thing is certain: government is what we agree to do together, whether we are talking about revenue, laws, highways, or public services.

This Patriot's Day, let's be more like our foremothers and forefathers and renew a spirit of revolutionary activism that draws us into political action. After all, government is all of us—sons and daughters of an ever-emerging nation.
on April 19, 2011
Email ThisBlogThis!Share to TwitterShare to FacebookShare to Pinterest

Government mandates.  Increased class sizes.  Shrinking budgets.  Curriculum cuts.  Public schools today are challenged to provide every child with opportunities to meet their educational needs ... budgets are tight but government requirements and children's needs are growing.
The state of Massachusetts and local communities, with the federal government as a critical third partner, have a shared responsibility for maintaining public schools and assuring that all children have equitable access to a high-quality public education.
Across , schools lack resources for critical programs they need to reduce the achievement gap and overcome barriers to learning that threaten the quality of education for every child, and leave our most vulnerable children behind.
To keep the promise of public education alive, we must renew our partnership with our policy makers and  promote a more fruitful collaboration on behalf of every child in every public school in every city and town.
The Parent Teacher Association is the oldest volunteer child advocacy organization in the country.  I am a  member of the Massachusetts PTA because we are dedicated to building community and statewide partnerships that work for our schools and our children.  Being a member of our national and state PTA accomplishes great things; a